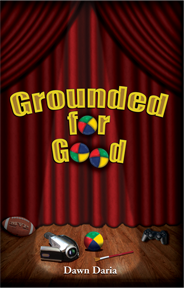 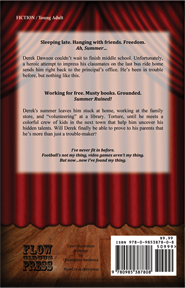 Available on Smash Words, Kindle Store, and B&N Store.
Sleeping late. Hanging with friends. Freedom.Ah, Summer...
Derek Dawson couldn't wait to finish middle school. Unfortunately, a heroic attempt to impress his classmates on the last bus ride home sends him right back to the principal's office. He's been in trouble before, but nothing like this.
Working for free. Musty books. Grounded.Summer Ruined!
Derek's summer leaves him stuck at home, working at the family store, and "volunteering" at a library. Torture, until he meets a colorful crew of kids in the next town that help him uncover his hidden talents. Will Derek finally be able to prove to his parents that he's more than just a trouble-maker?
I've never fit in before. Football's not my thing, video games aren't my thing.But now...now I've found my thing.
Other reviews:
Ms. Daria hit a home run with this one and I want to recommend it to my compatriots. Teens, young adults, and heck, I, a full grown adult, even had troubling putting it down... It is a great read and really pokes at the little things in life that matter. It is truly outstanding. Goodreads review

loved it, very thought provoking about judging a person by how they look, relationships with people different from who you typically are friends with, honesty, but also made me think of my role as a mom and what I've done to influence my boys.....Goodreads review

Many tweens and teens will identify with the emotions and problems of the young hero. It's all about growing up and finding your dream. Great Read! B&N Review

I found the characters enjoyable and the story engaging. By the end I really was having difficulty putting it down, as I really wanted to see how it all worked out. Smashwords review